Senator Mir Hasil Bizenjo, who was the chief guest on the occasion, said individuals such as Jalib do not need anyone’s appreciation. Jalib was a great person because he was a great political worker. History has proved him right.

Mr Bizenjo reminisced about the time after the fall of Dhaka when Jalib was in Lahore discussing the issue with a bunch of friends. The rulers at the time had still not accepted the formation of Bangladesh. But Jalib and his friends thought otherwise and went out into the streets saying we should accept the new country. But they were terribly beaten up by the people in the streets.

Mr Bizenjo said Jalib didn’t care who he was up against. Once in front of Akbar Bugti, who was the governor of Balochistan at the time, he read out a couplet against the politician. Jalib led a political struggle which was the reason he had joined the National Awami Party.

He loved workers and labourers. The three eras of the poet — ’60s, ’70s and ’80s — had made him even a more powerful man in 2018 as the high and mighty now recited his verses. Jalib, Mir Gul Khan Naseer and Faiz weren’t just poets, they were revolutionaries. Jalib was distinct because in his struggle for the working class, he never thought about his own well-being or his children’s.

Retired Justice Rasheed A. Razvi in his presidential address said that both Jalib and Saqi had sacrificed a lot for their cause. He argued that throughout his life he had been hearing that one should support the lesser evil [to support a bigger cause]. He told the audience that he was coming from an event where the NSF [National Students Federation] had been revived after 15 years and hoped that it would steer the student community towards a progressive trend. He insisted that time had come to resist the forces of the status quo.

Muslim Shamim shed light on the art of Habib Jalib. He said if there were similarities between the poet’s personality and his work, then it’s bound to create great art. Jalib’s poetry and personality were the same. His poems spoke of truth which is the reason he became legendary in his lifetime.

Karamat Ali said Jalib took part in practical politics. Going down memory lane, he said when he was, in the 1970s, working as an apprentice of the great artist Sadequain in Lahore, Jalib and writer Munnu Bhai were the two people who used to regularly visit the painter and indulge in lively socio-political debates. Sadequain was a staunch Marxist. Karamat Ali urged that we now need a labour movement and should think about it on a broader scale.

Aqeel Abbas Jafri read out a paper in which he drew a sketch of Jam Saqi’s life and work.

Ramzan Ahmed said if Shahbaz Sharif was reciting Jalib’s verses, then it’s the victory of the poet. Both Jalib and Saqi were in love with the workers.

Tauqeer Chughtai paid a tribute to Jam Saqi in verse.

Habib Jalib’s son Nasir Jalib said Jam Saqi spoke against those in power in difficult times. He also quoted one of his father’s couplets:

Zarre hi sahi koh se takra to gaey hum
Dil le ke sar-i-arsa-i-gham aa to gaey hum
[I am a mere speck, but have fought with a mountain
I have brought my heart into the land of sorrow]

It will do a great service to Jalib’s memory when the next time Mr Pervaiz organises such an event, instead of calling on more than a dozen speakers, he invites a few personalities who can speak on Jalib’s life and poetry eloquently.

The Arts Council of Pakistan, Karachi (ACP) is arguably the finest non-profit organization in the country for the promotion of Fine Arts and Performing Arts. As Pakistan’s first premiere established organization dedicated to supporting the Arts since 1954, ACP has brought together the finest artists of extraordinary caliber, and the most diverse performers that have put Pakistan on the global map of fame over the past six decades. Not only does our organization host more than 500 events a year, it also enthusiastically works to represent the soft image of Pakistan through several artistic endeavours including Music, Theatre, Dance and Fine Arts. Additionally we host and endorse socio-cultural educational initiatives for the country’s youth and for the Council’s active members as well as the nation’s artist community. (More) 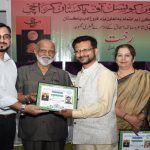 Arts Council hosted the launching ceremony of the book “Rakht”

Recognition Ceremony of the book ‘Shama-e-Mohabbat’ was held today

‘The Party is Over’ a book by Sohail Warraich launched today

Condolence Reference Session, in the Memory of Muzaffar Ahmed Hashmi

Qazi Wajid left behind a wide vacuum that could never be filled. Speakers

Painting Exhibition by Quetta based artist

“The Human Condition” Two day’s Painting exhibition ON for public

Exquisite exhibition of Holy Quran, made by thread

An inauguration of exclusive Painting exhibition done by Bilawal Bhutto

An evening with Iqbal Haider

An evening with delegates of IDEAS 2018

An evening with prominent writer of Spy Novel’s H. Iqbal

An evening with Poet Khalil Kumbhar and Artist Rafiq Faqeer

An evening with member Imran Sarwana

Ghazal Night with Suhail, Shoaib Najmi and others

A poetic evening with Sabeen Saif and Wajih Sani

An evening for Peace in Karachi by Library Committee

Final round “She Loves Tech” competition

An evening with delegates of IDEAS 2018

Azadi Festival 2018 kick off on the colorful evening of independence

Awami Theater Festival 2018 kicks off today with the play “

The comedy play “Sab Golmaal Hai” was presented for Members

Adab Festival to be held on 31st January

International Day of the Girl Child

Azadi Festival 2018 kick off on the colorful evening of independence

You may have missed